AMSTERDAM, July 14, 2021 /PRNewswire/ -- On Tuesday July 13th LTR Nigeria organized the kickoff event of Ready4PEP, an innovative 4-year implementation project, at the District Head's Palace in Misau local government area, Bauchi State. The launch means the first hand out of a new preventive medicine for contacts of leprosy patients. In the presence of national media, local authorities, health workers and persons affected by leprosy, the first close contacts of leprosy patients received the antibiotic rifampicin. This medicine is proven to interrupt the spread and devastating effects of leprosy. During the event, two men, three women and three children received the preventive treatment. The project is coordinated by NLR, until no Leprosy Remains (NLR) and LTR Nigeria in close collaboration with national health authorities. 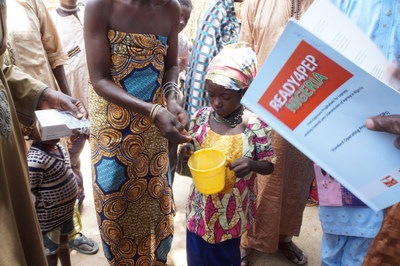 Research shows that the combination of contact screening and the provision of a single-dose of rifampicin as post-exposure prophylaxis (SDR-PEP) is effective and feasible. The World Health Organization (WHO) recommends national programmes to initiate SDR-PEP. According to the WHO 2019 leprosy update, Nigeria had 2,424 newly detected leprosy patients, thereby accounting for about ten percent of the total new leprosy patients in Africa. Nigeria is one of the first countries to implement SDR-PEP on a larger scale. A total of 21,000 contacts are expected to receive SDR-PEP.

The approach to successfully implement SDR-PEP considers four crucial elements: active case finding, geological mapping, capacity building of health workers and distribution of medication. Since the start of 2020, NLR and LTR Nigeria in close collaboration with the national tuberculosis and leprosy control programme, the German Leprosy and Tuberculosis Relief Association (GLRA) and the Leprosy Mission Nigeria (TLMN) took all preparatory steps to start the final step, distributing SDR-PEP to the contacts of confirmed leprosy patients.

Health workers visited each contact and screened them for signs and symptoms of leprosy. Contacts that did not display signs and symptoms of the disease, and meet the eligibility criteria for SDR-PEP administration, will now start to receive a single dose of rifampicin. The contacts of all new leprosy patients in the projects intervention areas will also be screened for leprosy, continuing the cycle.

Bauchi State, where the event takes place, is one of the six Ready4PEP implementation states and among the top 15 leprosy high burden states in Nigeria. The intervention areas are located in the North-East/North-West (LTR Nigeria), South-East/South-South (GLRA) and North-West/North-Central (TLM Nigeria) of the country. This results in a more diversified pattern of areas with a very different sociocultural and socioeconomic context and different approaches used by the project partners. "Now there is hope. Leprosy can be debilitating and disfiguring, but leprosy is curable and now even preventable. This project shows that this intervention is for the community and we are all stakeholders," says Dr. Suleiman Abdullahi, Medical Adviser LTR Nigeria.

In NLR's Ready4PEP project a preventive treatment to stop leprosy transmission, SDR-PEP, is implemented in Mozambique and Nigeria. The goal is to interrupt the spread and harmful effects of leprosy through well thought-out interventions targeting a range of stakeholders. The governments of both countries have shown enthusiasm and willingness to work together with the partners in this project to introduce SDR-PEP into their leprosy control programmes and improve care for persons affected. The Nigerian National Programme on TB, Buruli ulcer and Leprosy (NPTBL) is committed towards the project and staff was present at the launch event. The distribution of medication will soon start in Mozambique as well. Both countries account for over twenty percent of the total new leprosy patients in Africa.

About NLR | until No Leprosy Remains

NLR is an international NGO that has been one of the major change-makers in the fight against leprosy in the past 50 years. NLR takes focuses on research and driving evidence-based innovation to achieve zero transmission, zero disability and zero discrimination due to leprosy. NLR has offices in some of the most leprosy-endemic countries: India, Brazil, Indonesia, Mozambique and Nepal and an international office in the Netherlands. A worldwide total of 200 staff work together to achieve zero leprosy. We continue our efforts until No Leprosy Remains. Find out more: www.nlrinternational.org/ready4pep